The Vâtre Chapel, now privately owned, officially dates from the 12th century; but the site was probably in activity several centuries earlier. The chapel was renovated in the 17th century and again in 1942.

It is said that each year on June 25, a pilgrimmage to Saint-Jean-de-Vâtre was made by children with respiratory ailments. It is also said in the annals of Saint-Paul, the parish church of Jullié, that one would go on « viage » (the Anglo-Norman word for trip) to the chapel for children with convulsions. (M.Violet relates this in an article on superstitions and beliefs published in 1940 in a journal for friends of Tournus: « Bulletin des Amis de Tournus ».)

A spring lay nearby where one would gather to invoke the Nymph who made the place her dwelling. Gradually the forests made way for vineyards and the waters lost, little by little, their faithful following. In our days the taste for waters has been utterly replaced by that for wines.

Discover Jullié with the whole family

A walk which lasts an hour and a half will take you to the most beautiful spots of our community. Adapted for all ages and the whole family, this footpath is ideal for discovering on one’s own the cultural heritage and natural wonders of the Beaujolais region, whatever the season.

How does it work? 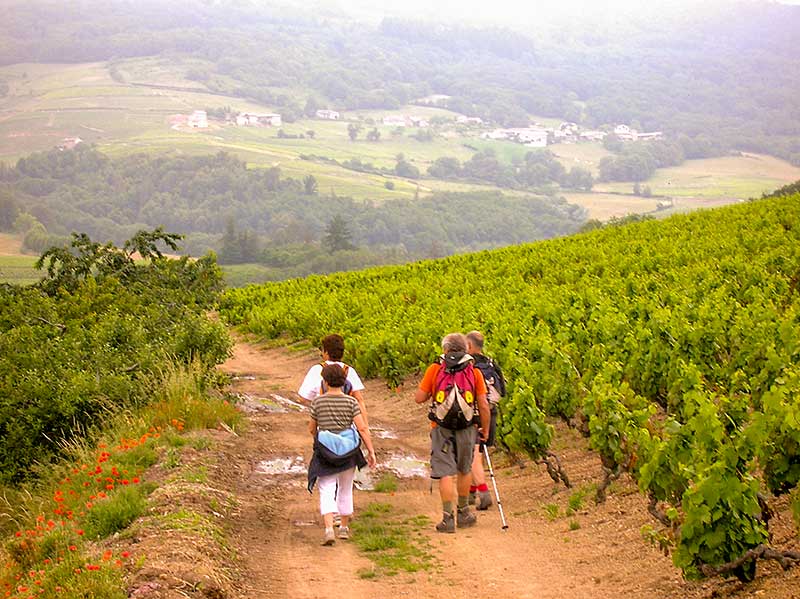 Designed for families, Randloland circuits are like treasure hunts. They are made up of a guide for the parents and individual cards for children of three different age groups: from 4 to 6, from 7 to 9, and from 9 to 12 years old.

These walking tours can be downloaded for free from the websites ‘Destination Beaujolais’, the Beaujolais Tourist Office, or simply here.
Les circuits Randoland (Only in french)

Have a good walk!

Five lodgings totally renovated in the heart of our small and quiet village. An agreeable outdoor space adjoins the lodgings and a playground is just a hundred meters away. All the municipal lodgings are fully equipped with free WIFI.

The Farm of Rolland on the Siberia Pass, offers meals on the farm in a warm family atmosphere. Meals are made 100% from the farm’s own production  along with that of neighboring farms, according to season.